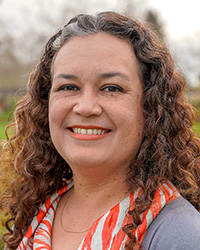 Before becoming the Executive Director of the Shortino Foundation, Tamara served as Executive Director for the School of Arts and Culture at MHP in East San José since it was started in 2011. During Alvarado’s leadership at the School of Arts and Culture, the School and the Mexican Heritage Plaza earned a positive reputation for their commitment to their East San José communities and the excellence of their programs. The School has developed a strong financial position and enjoys the committed support of many multi-year funders. It recently completed a long-term strategic plan to carry out its vision for enriching the arts and culture of the people of San José.

Prior to her service at the School, Alvarado was director of the Multicultural Arts Leadership Institute at 1stAct Silicon Valley before it became a program at the School of Arts and Culture, and was Executive Director of MACLA (Movimiento de Arte y Cultura Latino Americana) in San José. She has a bachelor’s degree in Spanish Literature from Stanford University.

Prior to her current position at Shortino, Kim served at the Marketing Lead for Shortino grantee, ALearn (now merged with the Silicon Valley Education Foundation). Before that, she served a first stint as Shortino Grants Manager, from 2011 to 2014. Prior to her nonprofit career, she was in Marketing at Hewlett-Packard Company for 18 years. She has a bachelor’s degree in Political Science from the University of Arizona, a master’s in International Management from the Thunderbird School of Global Management, and a master’s in Organizational Communication from Purdue University.

Prior to joining the Leo M. Shortino Family Foundation, Claudia was the Executive Assistant at the School of Arts and Culture at the Mexican Heritage Plaza. There, she supported the Executive Director with fund development, donor relations, board communication and many other tasks.

During her time as an Event Developer at Giant Creative Services, she worked on events with numerous civic, non-profit and arts organizations. Prior to Giant, Claudia worked at the Jonsson Cancer Center Foundation at UCLA. As a Silicon Valley native, Claudia previously worked in event sales and vendor relations for the Computer History Museum in Mountain View. She holds a bachelor’s degree from San Jose State University in Recreation and Leisure Studies.

Tara has 20 years of experience working with the nonprofit sector, focusing on programmatic grant-making, compliance, assessment, and grants management. She began working with the Shortino Family Foundation in 2014. Prior positions include working as a consultant at KPMG serving large private foundations and various roles with education focused nonprofit organizations. She holds a bachelor’s degree from the University of Washington and master’s degree from the University of California, San Diego.